An open letter to the corporate leadership of the SCA, lightly edited for clarity from the version I submitted in September 2022. — Mathghamhain

There is a long-standing issue within the Society around licensing for software developed by volunteers as well as related IT-related creations.

My direct experience with this is mostly in the context of the East Kingdom webministry, but in talking with folks from other kingdoms I’ve gotten the impression that this issue is widespread and dates back more than twenty years.

If you look at all the software written for various branches of the SCA — event calendars, order-of-precedence repositories, custom website themes, martial-authorization databases — I believe you will find that only a minority of it has clear copyright attributions or explicit licenses.

Most of the time this doesn’t really matter, but when I started asking about it a couple of years ago, I discovered that numerous kingdoms have their own horror story about a time some volunteer abruptly changed their mind and announced that the SCA could no longer use the code they’d developed and that the local group had come to rely on.

The situation is also a barrier to sharing code, and may contribute to the pattern of each kingdom “reinventing the wheel” — in the absence of written licenses, it’s difficult to publish code as open source or otherwise redistribute it within the Society or beyond.

As far as I can tell, there hasn’t ever been any direction from the Society level on this subject.

While this issue most obviously affects the webministry, it also appears elsewhere, such as when heralds or marshals create database applications.

When I drafted a proposed Society handbook on release forms last year, I included a short chapter on this subject, along with some proposed paperwork that could be used to memorialize license agreements in a simple way; I think this survived into the version of the handbook that was sent to the Board for review, but I am not sure what will eventually be published.

I think it’s important to support a range of options for licensing rather than insisting that everything follow a single model — only some projects can be made into open source, only some developers will transfer all rights to the Society, etc — so it’s useful to have a couple of approaches that people can pick from while remaining confident that all of them protect the Society’s interests.

I’ve put together a proposed template for such agreements below.

(For the record, I am not a lawyer, and this is not professional legal advice — it’s just my opinion based on three decades of experience negotiating commercial software development contracts.)

I hope this is of use to you. I’m glad to answer any questions you might have.

In service to the dream, 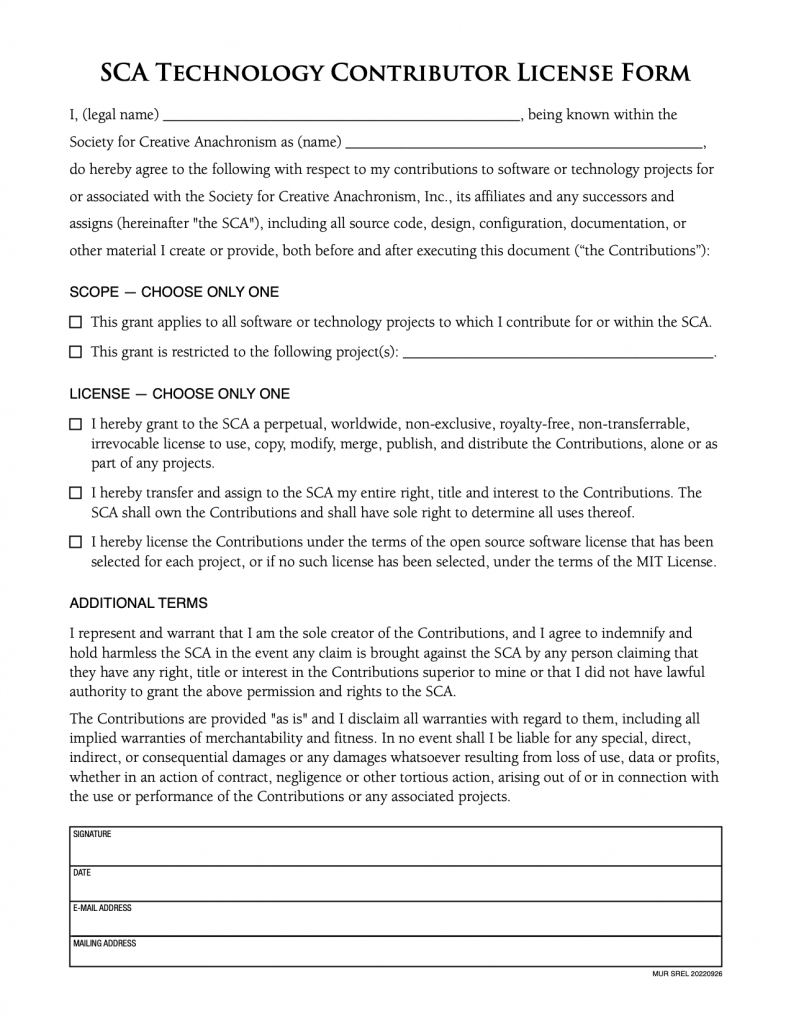 2 thoughts on “Licensing of Software Developed for the SCA”