We chose Tyddyn Ystradfflyr as the name for our family’s household in the context of our historical re-creation activities within the Society for Creative Anachronism.

The name is Welsh, and is intended to suggest a small family farm in an idyllic medieval valley filled with flowers.

The word Tyddyn is Welsh for “farmstead” or “family farm,” while Ystradfflyr is a compound word meaning “vale of flowers.”

With a bit of poetic license, one might render this into English as “Bloomingdale Farm,” a name that appealed to us as an echo of the Bloomingdale neighborhood of New York City where we have lived for the last fifteen years.

The historical documents we cited to support the registration of this name with the Society’s College of Arms are shown below.

Tyddyn is a Old Welsh word meaning a family farmstead, as documented in Tangwystyl verch Morgant Glasvryn’s “Period Welsh Models for SCA Households and the Nomenclature Thereof” which says:

… tyddyns or homesteads, each with its share in the surrounding fields…. each tyddyn is held, in theory, by an individual household … the Ordinance Survey Map of Anglesey turns up more examples, such as Tyddyn Mawr (Big Tyddyn) and Tyddyn y Felin (Tyddyn of the Mill).”

Ystradfflyr is the historical name of a mansion in central Wales, as documented in Aryanhwy merch Catmael’s “A Collection of Welsh Household Names from 1602” which says:

A month ago I assisted with a class on updating content in the East Kingdom Wiki, and as an exercise during that class I put together some basic background information on our eleventh century farm.

Unfortunately, my wiki page is already pretty crowded, so in hopes of keeping things readable I’ve now moved those notes to a page on this site instead, and I look forward to accumulating more of this type of information here in the future. 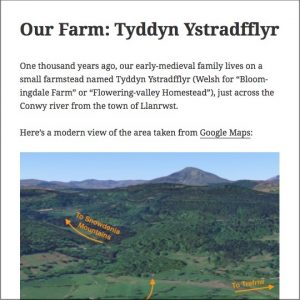