A bunch of people are camping with Østgarðr at Pennsic for the first time this year, and it’s been a few years since any of us did this, so I thought it would be useful to write up some notes about one aspect of camp life that might be of interest to others: our kitchen.

The Østgarðr encampment does not have a camp kitchen or a formal meal plan, but it does have a tradition of generous households and communal meals which everyone in camp is welcome to share.

But before I get to that, let’s begin with a bit of background information for folks who are new to Pennsic.

Of course, there’s no requirement that you eat in camp — there are numerous food vendors on site selling ready-to-eat meals, and you could dine out for the entire time.

The main food court area has several cafeteria-style vendors serving different styles of food, from breakfast through late-night snacks and ice cream. Other vendors are located near the barn.

(And of course you can drive off-site at any time to eat in the various truck stops and casual restaurants in the surrounding area.)

However, most people do chose to eat many of their meals in camp.

You can prepare your own meals however you’d like, and eat on your own, or if you’re feeling social, join other folks in the camp’s shared spaces to dine together.

Some households bring full sets of kitchen equipment and prepare and eat all of the meals in their own space, others always cook and eat communally, and some switch back forth from day to day — whatever makes sense for you.

For groceries, you can either shop on-site at the Coopers’ store, or drive to one of the big suburban grocery stores.

The Cooper’s store is a five-minute walk from camp, and is the size of a small neighborhood grocery store, carrying pantry staples like dry and canned goods, chips, cooking oil, bread, butter, milk, eggs, ice cream, and a limited supply of fresh and frozen produce. It is restocked daily, but they do run out of things from time to time. Around the corner from the main store is an outdoor counter selling large bags of ice and bottled water.

There are large grocery stores about 20–25 minutes away, either east towards Butler or west towards New Castle. We tend to visit the Giant Eagle supermarket, but there are also Walmart locations and others. These are huge suburban grocery stores serving towns larger than Pennsic and always seem well stocked, although remember that this is Middle America so they might not have exotic ingredients like long pepper or goat meat. (Beer, cider, wine and soda are available at the grocery stores or at specialty stores along that same road.)

Our usual strategy is to do an off-site grocery-store run about two or three times during the two weeks we are there, which lets us stock up on bulk foods and supplies to fill our pantry and coolers — and then we visit the Cooper’s store almost every day to buy milk and salad greens and whatever odds and ends we might be running low on.

A few other households in camp follow a similar schedule, and most of us are generally happy to have an extra person hitch a ride “into town” with us to stock up on supplies — or if you only need a few items, to take a shopping list and pick things up for you.

Because not everyone is able to tote an entire kitchen worth of gear with them, in recent years Alienor and I (House Ystradfflyr) have made our kitchen available to other residents of Østgarðr’s encampment.

We do ask that you share nicely and help with cleanup, as you would at any Society event. (In theory, if someone ever really abuses the facilities or persistently makes it difficult for other people to use, we reserve the right to withdraw their invitation, but we’ve never had this problem and I don’t expect we will in the future.) 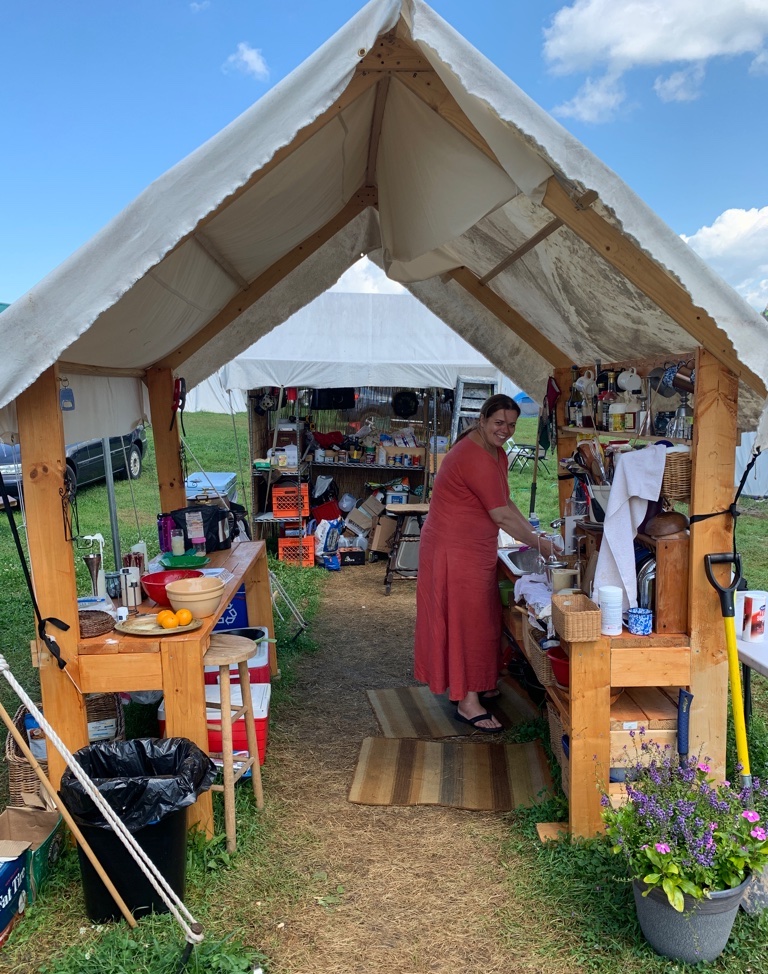 We also have some dining-room furniture that is typically put up under our shade fly or the Provincial pavilion or both:

Please note that Alax and I don’t eat any kind of meat, poultry, or seafood; you’re welcome to cook these items in our kitchen, but the guidelines about clean-up go double — please do not leave meat juices on the counters, or leave a pan full of bacon grease for us to find later.

Other than that, we don’t have any notable food issues. If you have allergies, please be aware that our kitchen might contain nuts or dairy or any number of other items — please exercise due diligence and protect yourself.

Because of the extended duration of this event, keeping food safe and fresh in coolers is more challenging that it would be at a picnic or overnight event.

Restocking ice for the coolers requires daily attention — we have a big wheeled cart, as do a couple of other households, and pretty much every day someone will roll over to the Coopers’ store and buy several jumbo bags of ice.

Some of the ice is dumped into our 5-gallon water cooler, some might be set aside for cold drinks, and the rest is dumped into the coolers to keep food and drinks cold.

The coolers are typically segregated — the fancy Yeti cooler holds dairy and delicate foods like berries, another cooler gets sturdy packaged foods, and a third is set aside for drinks.

A lot of cold is lost each time a cooler is opened, so try to minimize the number of times they need to be visited, and don’t leave them standing opening any longer than needed.

An important part of keeping the coolers hygienic is regularly draining the meltwater. This is less urgent for a cooler that only ever contains sealed single-serving drinks, such as beer and soda — but it’s very important for food coolers, because microbes can survive even in cold water, and we don’t want meltwater to carry juices from a package of raw meat into an adjacent package of salad greens which will be served uncooked.

If you’re putting something into our coolers, make sure it’s very securely wrapped so nothing can leak out, and nothing can leak in. We typically use plastic zipper bags for this, sometimes double layered.

There’s a shared water spigot at the top of the hill adjacent to the camp, from which we run a hose down with branches off to the shower, sink, and other places where it’s needed.

The water pressure isn’t always reliable, although it has gotten better in recent years. If there is no water flowing into camp, make sure that the hose isn’t kinked and the spigot isn’t turned off. If that doesn’t solve the problem, send someone to the War Room to report the problem and the Coopers’ staff will investigate.

The water is supplied from on-site wells, and contains a significant amount of dissolved minerals, including iron. This is another situation that has improved over the years, but it’s still quite different from New York tap water. It’s fine for washing and bathing, but it does have a bit of a flavor that some people find objectionable, so we generally buy gallons of water from the Coopers’ store for drinking water.

Moreover, while the water coming out of the tap is clear, over time (especially in sunlight) the minerals tend to drop out of solution and form a rust-colored cloud. If you rinse your clothes in it and then hang them in the sun, they’ll acquire a slight brown tint that can take some effort to wash out.

You can wash items individually in the kitchen sink while you’re preparing food. Try not to leave the water running longer than you need it, and avoid sending lots of solid food down the drain.

To reduce the amount of water needed, when washing a lot of dishes, such as after a communal meal, we use a “three tub” system. To do this, clear off a table or one of the prep counters, and set out three dishpans of water:

Dishes should be scraped clean into the trash, then dunked in the wash tub and scrubbed clean, then into the hot water to rinse the soap off, visually inspected to see if they need to go back to the wash tub for more scrubbing, and finally into the cold rinse before being laid out to air dry.

If there are a lot of dishes to be washed, you may need to change change out the water in the wash tubs whenever they look dirty or are no longer hot.

(Single households can get away with skipping bleach in the final rinse water, but it’s a good idea when lots of unrelated people are eating together to reduce the chance of illness. As the dishes dry over the course of the next hour, the minuscule amount of bleach that might remain on their surface will be exposed to fresh air and break down into water and table salt.)

In recent years, Østgarðr’s encampment hasn’t had a formal “meal plan” program that people can opt-in to, but a bunch of us have informally done a lot of communal cooking and dining, which has been lovely.

I am not promising to feed everyone every night, but I do cook dinner most days we’re on site, and when I do I typically make enough to share. Some other folks also enjoy cooking several meals for a group, while others might choose to just prepare their own food separately but then bring it over and eat with whomever is around.

It sounds like there will be more people camping with Østgarðr this year than at any time in the last decade, so we might have to play things by ear as we adjust to the larger group and figure out how many people will want to use the kitchen or eat with us on an average day, but I expect we’ll manage.

I can see the value in having a bit of organization so we don’t wind up with too much food on one night and not enough on another, but people’s tastes and food sensitivities and budgets are all so different that it seems impractical to shoehorn everyone into a single fixed menu that gets locked in ahead of time.

At least for this coming year, we plan on keeping this informal, so if you’d like to cook for others, or you’re hoping that other people will cook for you, speak to folks around camp and we’ll figure it out.

How Can I Contribute?

If you’re camping with us and want to help with the kitchen and meals, here are some things you can do to contribute: 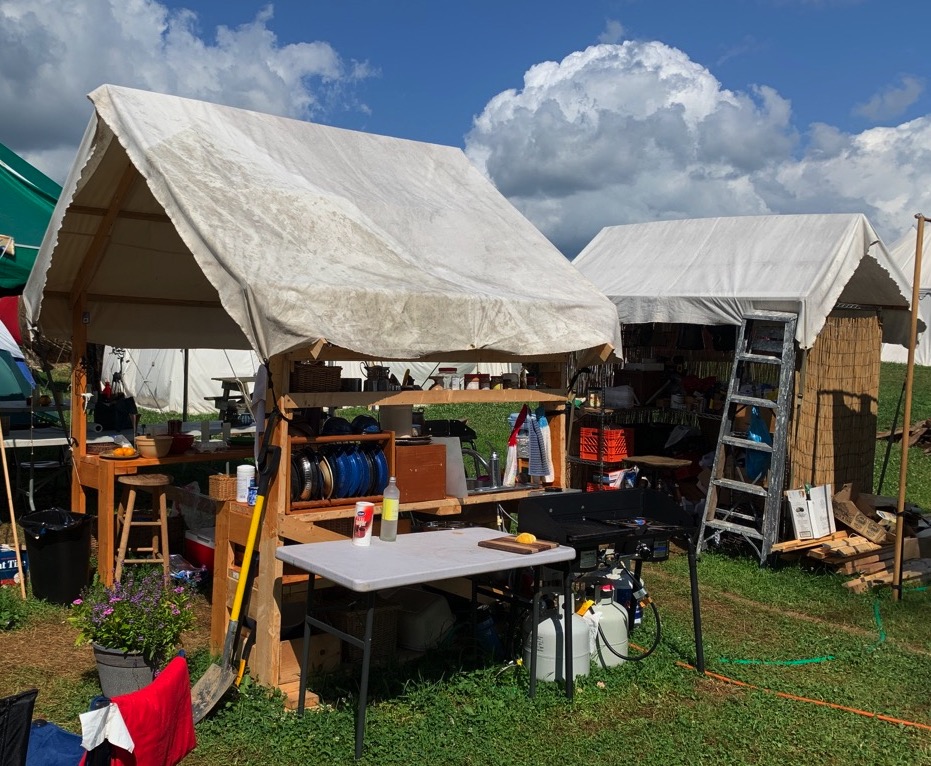