The Crown Province of Østgarðr owns a 20′ x 30′ pavilion, generally known as “the green and white,” which is used for most of our outdoor events.

The tent was purchased sometime around 2013 and is still in good shape, with just one or two small holes in the fabric.

Putting it up takes some effort, but the shade and rain cover are well worth the effort.

You will need the following elements of the tent setup:

You’ll also need these tools, which are not provided:

Setup and teardown both require at least two strong, able-bodied people, although having a team of four makes things go faster.

(In theory, a larger team could move even more quickly, but at some point the process breaks down and you spend more time trying to coordinate people or standing around waiting for the next step than you do putting the tent up — having a dozen people working on this simultaneously is a recipe for inefficiency.)

Start by removing the canvas from its bag and unfurling it in the desired location.

Make sure the canvas is right-side-up. Among other clues, look for the small rope that is attached to the underside of the tent, all along the outer edge; if this is visible on the top surface, the canvas is upside down.

Decide how far out you’re going to space the tent pegs away from the tent itself — three feet is generally sufficient, although if you were expecting a major storm you could make it three and a half or even four feet.

Use the hammer to drive a peg into the ground at the desired distance out from each rope location — four along each long side, and three along each shorter side. 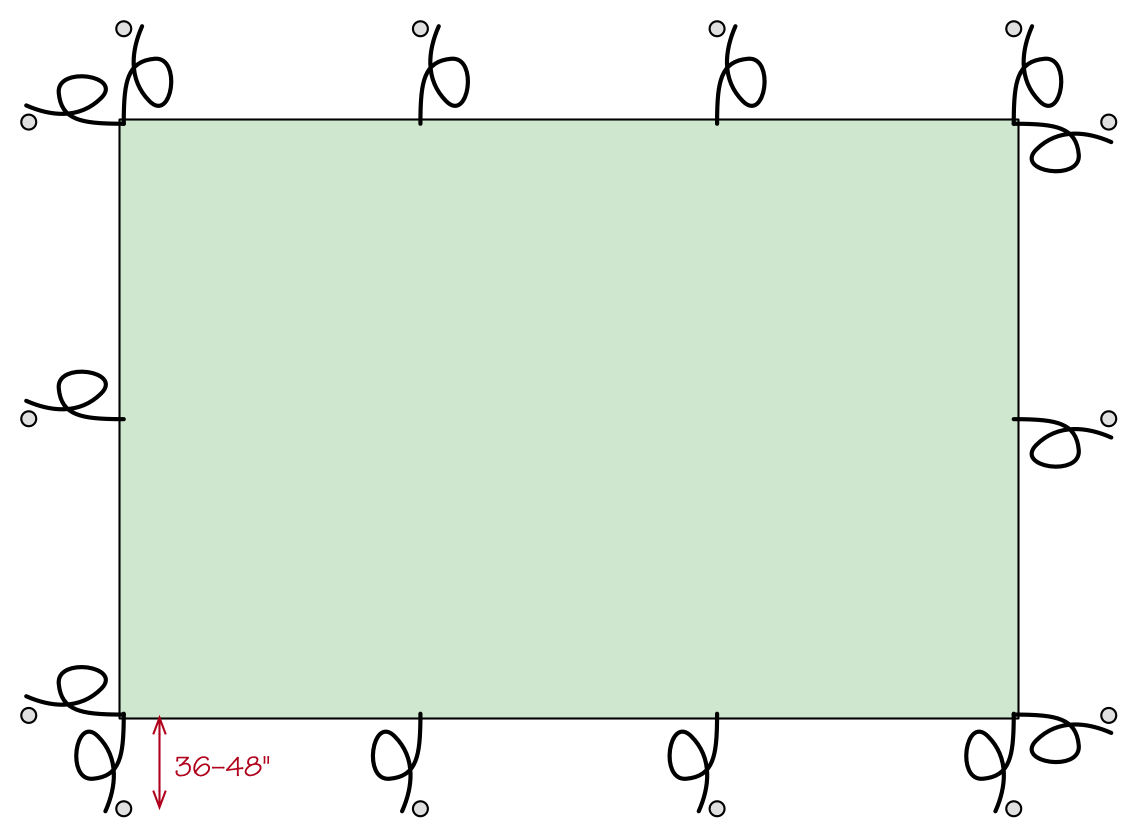 The tent pegs should enter the ground at a 45° angle, with their upper ends leaning away from the tent. Each peg should penetrate most of the way into the ground, while leaving enough above ground for the rope to attach. (In good conditions, for a short event, half-way into the ground is sufficient; in terrible weather or with loose soil, aim for them to be more like three-quarters of the way in.)

Then, starting from one side and working towards the other, put up each of the outside poles and use the ropes to prop it upright. 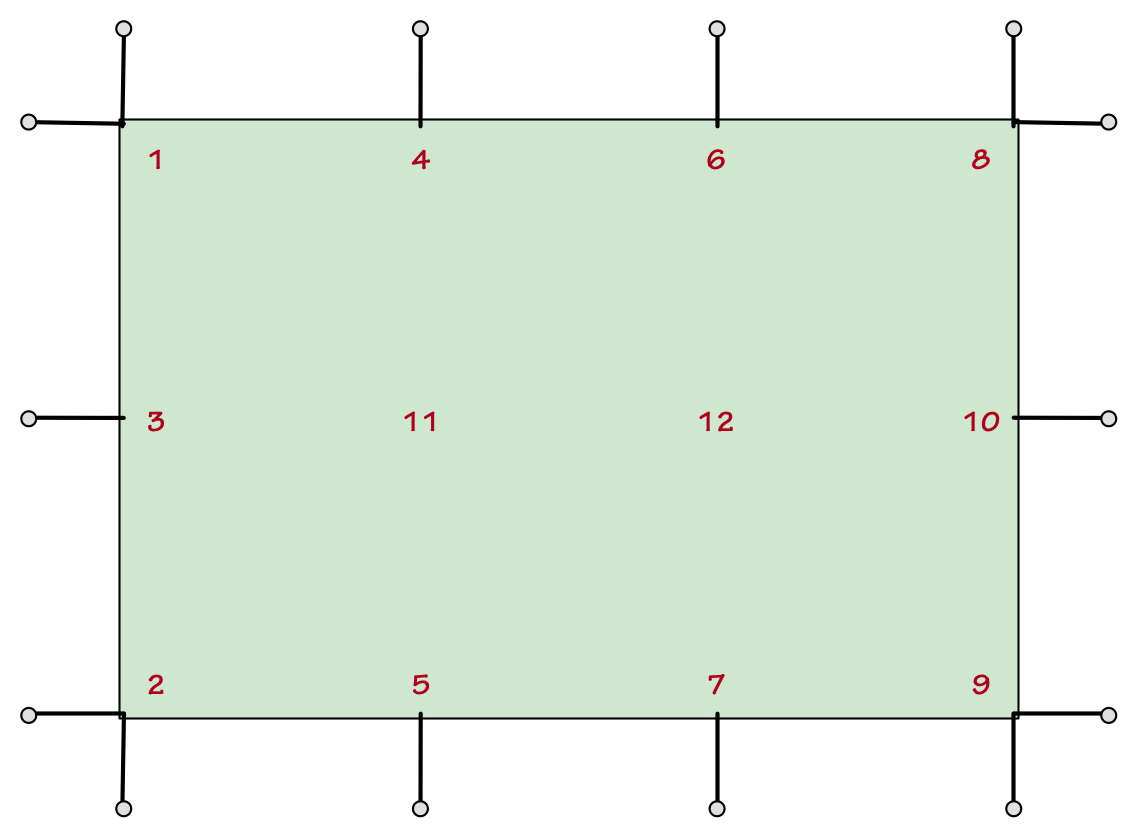 If setting up with a team of two, one person can raise the pole while the other sets the ropes; with a team of four, you can set two poles on opposite sides simultaneously.

Be sure to thread the spike of each pole through the corresponding grommet, without stabbing the tent canvas. 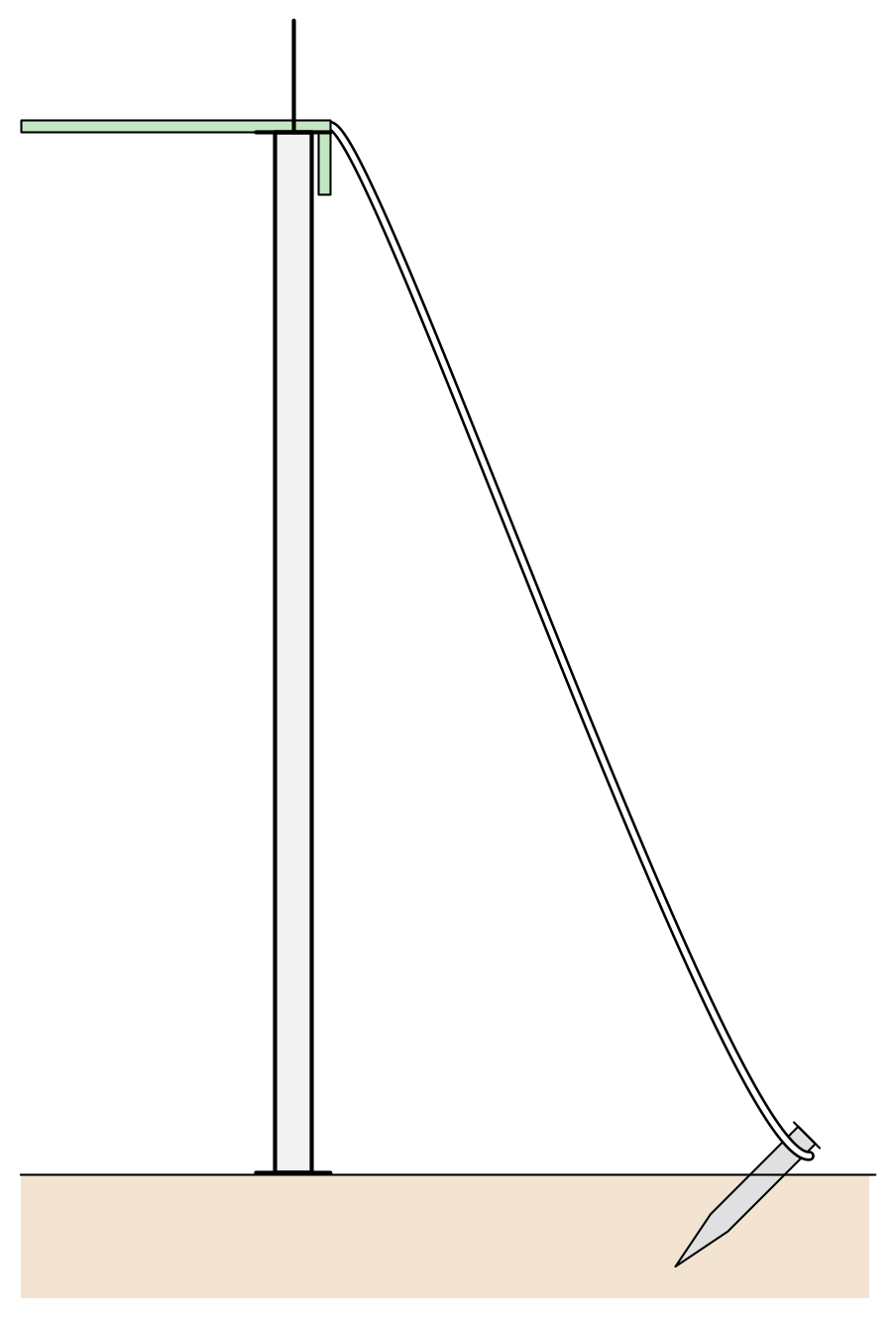 When placing the base of each pole, pay attention to the location of the tent pegs, which show where the poles should wind up.

After all of the edge poles are in place, check their alignment and tighten ropes as needed to ensure the tent is square.

Lastly, bring the center poles in under the canvas and connect them to form their full 12′ lengths.

Feed the spikes through the two center grommets, then look for the small ropes that dangle down from those grommets and use a simple knot to lash them to the poles just beneath their upper ends. (This should prevent a gust of wind from lifting the canvas off of the center poles and allowing them to fall.)

Coordinating your movements, lift both of the center poles to vertical.

Depending on the slope and evenness of the ground, you might find that placing a stack of wooden blocks from 4″ to 8″ high under each of the two center poles helps to keep the canvas taut so that it sheds rain without catching any in pockets along the edge.

Do a final pass around the entire tent, tightening each rope to make the tent snug. Tuck the canvas bag somewhere safe to use when repacking.

The canvas and ropes both tend to loosen over time, so you may need to re-tighten the ropes periodically.

Walk around the edge of the tent, shaking the roof to make sure that there is no water gathered in pockets just inside the edge, and nothing attached to any of the poles or ropes.

Coordinating your movements, lift both of the center poles and walk their bases to the side, lowering them to the ground.

Untie the small safety ropes from the center poles, and walk the poles out from under the tent.

Then, starting from one side and working towards the other, lower each of the edge poles, removing the spike from the grommet and stashing the pole out of the way.

Free the ropes from the tent pegs and toss them all in towards the center on top of the canvas.

Loosen the tent pegs by giving them a few side-to-side blows with the mallet in each direction, then wiggle them out and stash them for storage.

Make sure that all of the ropes are on top of the tent canvas, then fold it up. There are multiple approaches to folding the canvas, but the key is to produce a tight roll about 4.5 to 5 feet long so that it will fit in the bag.

One simple approach is as follows:

Finally, slide the heavy canvas roll into the bag. (This step is difficult to do with just two people, and really benefits from having a couple of extra hands to assist.)

Haul all of the elements away for use at the next event.

One thought on “Putting Up The Provincial Pavilion”